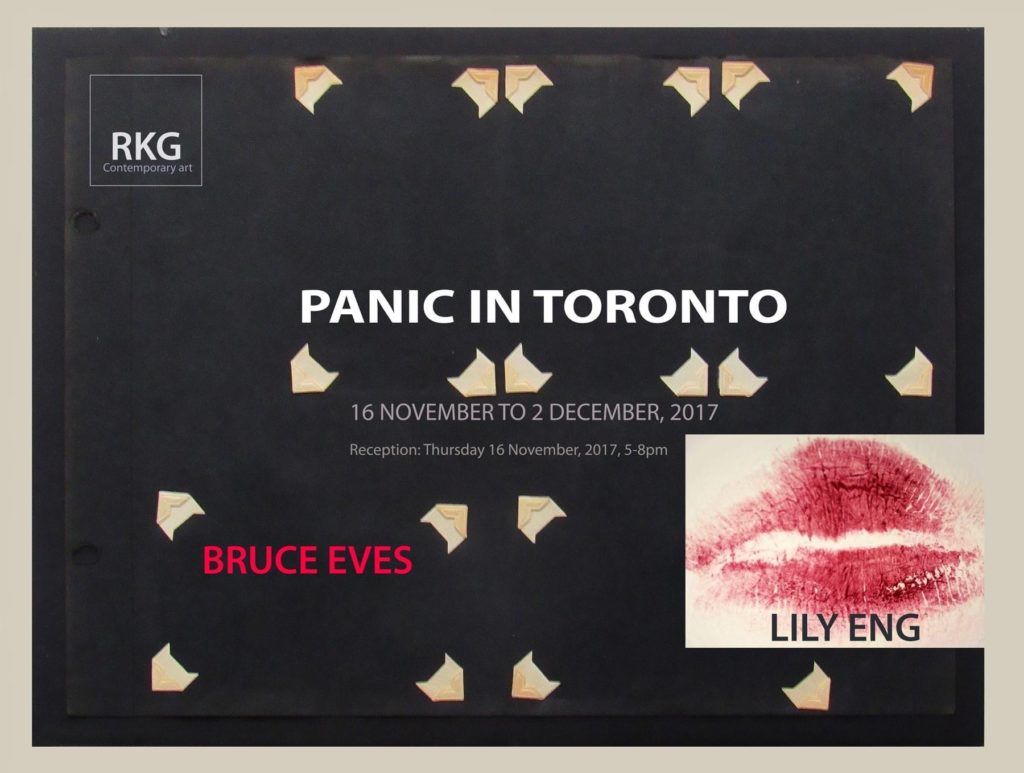 Robert Kananaj Gallery is honoured to have Bruce Eves, whose project of readymades has opened Pandora's box, and Lily Eng in performance, drawing her own movements.

Eves, a farmer's son, was dismissed as worthless to the family business after contracting polio as a small child in the early 1950s. As a student in the mid-1970s and already a gay rights activist, Bruce played an important role in the Centre for Experimental Arts and Communication (CEAC), becoming part of the history of the time until CEAC was forced to cease operations in 1978. Immediately afterwards, Bruce was pressured to leave Toronto. He spent the next twenty years in New York City.

There he created a legacy, building and cataloguing the International Gay History Archive, the biggest of its kind and now part of the Rare Books and Manuscript collection of the New York Public Library. However, social contribution and the feeling of a mission accomplished were no longer enough.

In 2001 Bruce shed the weight of a long-sensed misfit with New York. Returning to Toronto wasn't easy; he felt like a refugee in his own home town starting again from scratch, finding his only solace in art.

Everything Bruce touches now is fused with a social awareness of individual liberation. Youth and wisdom are not here to conquer life but live with it, and sometimes it's really scary to be oneself. We at RKG thank Bruce for his integral contribution to art.

- In grateful tribute to CEAC and Amerigo Marras

“Work #997: The Farmer’s Son (in Five Episodes) 1952-2017” is a new installation of Readymades by Bruce Eves that seesaw between joy and tragedy and joy and tragedy and cruelty and its remains, and echo what the philosopher Mary Warnock would insist “operates under perpetual tension: the only way to cope with life is to learn what to forget; the only way to feel one as an identity is to remember.”

These Readymades are not so much objects that have been merely selected, as were Duchamp’s ordinary-objects-elevated to-art chosen on the basis of their “visual indifference, and at the same time, on the total absence of good or bad taste” as they were curated. Eves did not need to go shopping to create this work, the objects and documents were already a part of his life; nor did he need to borrow the memory or experiences of others because these memories and experiences are his alone. They are in reality anti-readymade Readymades. The power of these object and documents lie not in the obvious banality of their form but rather in the potency of their content. This potency is only revealed through the demands of a close textural reading.

In the past Eves has exhibited conceptually-driven photo-based work that explored the interconnectedness of masculinity, aging, bias, history, and data collection. The elusive documents and objects presented here should be viewed as the peripheral supports and framing devices that hover in the background of Eves’ overall art practice, one that is understood through the mashed-up lens of gay history, art history, and his own internal zeitgeist.

The performance by Lily Eng starts around 6:30 p.m. and continues for the duration of the reception.  Lily will be creating drawings as a calligraphic record of the performance.

The drawings will be installed in the gallery as part of the performance, becoming an integral part of the exhibition. Additional performances will happen on a “ninja” basis.

Invigorating and revealing, Lily creates with  authentic ability to access her source of inner power in performance.

Her work is exhibited in the show and book "Is Toronto Burning?” by curator and author Philip Monk, "Three Years in the Making" (and Unmaking) of the Toronto Art Scene, and most recently as part of the Art Gallery of Ontario’s "Tributes and Tributaries."