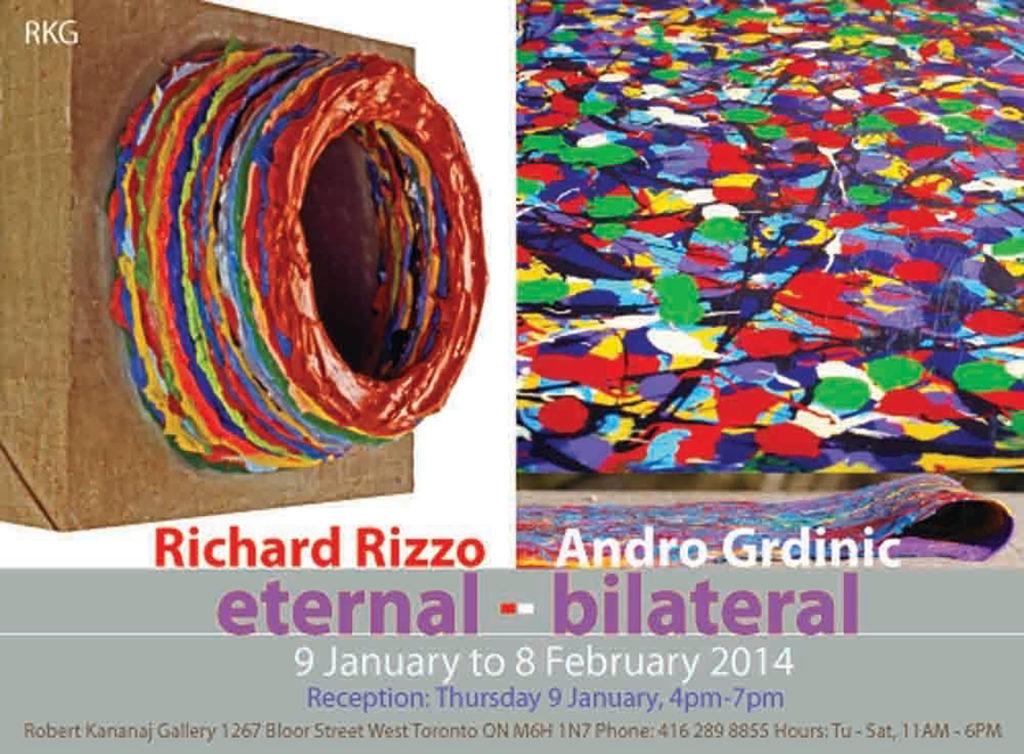 Richard Rizzo was born in 1979, in the city of York, and now resides in Toronto. He received his Master of Fine Arts specializing in Painting from the University of Waterloo.Richard is also the recipient of the Win Shantz Internship Scholarship. Richard works as Contract Faculty for York University in the Visual Arts and Social Sciences departments.

Richard’s work can be found in Bell Canada’s Corporate Collection as well as numerous Private Collections. Richard work has been shown both nationally and internationally.

The work in this exhibition is the result of philosophical contemplation and the concepts that followed from these moments. In this current body of work, I mediated on the idea of identity, memory and the frailty of the human condition.  I also incorporated the idea of discovery and play into my practice while sticking to the parameters I set for myself of simply pouring paint on a surface.  I played with how the paint came to rest, either by logical and calculated means, or by hanging the painting upside down, or by allowing it to dry for some time, but before it dried completely, I would disturb the painting to see its reaction. Through the materiality and physicality of paint, I explore these moments.  Paint thus acts as a metaphor for my body and mind, having set parameters that dictate its cause and effect. The very nature of painting; its essence, is the moment of state change from a fluid material into a solid state.
My painting practice is divided into four main parts: Inspiration, Material, Philosophy, and the Parameters, all of which are important to contextualizing my work within contemporary art. The inspiration for my work originates with the materiality and physicality of the medium of paint. Acrylic paint has boundaries that are inherent within its physical makeup. I intend to highlight the moment of state change in the material of acrylic paint from its original state of a fluid to its state change into a solid. The manner in which I apply paint is also of great interest to me because it symbolizes the intrinsic qualities in the makeup of the material and process, which I use. The properties of nature include the play of forces that interact with my processes that I used to create this body of work (forces such as wind, gravity, and time).
In contemplating my contributions to the discourse of painting, I became interested in Schopenhauer’s ideas regarding the nature of the will and object. In Schopenhauer’s work, The World as Will and Representation, he argues that the will is separate from object and that the will desires to be separate. This idea proposes that the body is an object while the inner mind or soul would be defined as the will. When I applied this notion to my painting practice I realized that the idea behind the created work of art was separate from the art object itself.  The intent and impression of a work of art can have many different interpretations and a myriad of meanings, depending on who is viewing the work. This relative approach to the multiplicity of meaning led me to ponder what painting meant to me and how I could relate to it. Through this research I realized that in all paintings there must be a binder and a pigment, and through the manipulation of paint on a ground with the use of ideas and gestures it all comes to rest. In that moment of rest, in that exact moment when the fluid nature of paint begins to change state from a liquid into a solid, is for me the essence of painting.

Andro Grdinić was born in Zagreb, Croatia, in 1984 and began his artistic career at the Škola primijenjene umjetnosti i dizajna (School of applied art and design). He subsequently moved to Rome, continuing his art studies at Rome's Accademia di Belle Arti. Now resides in Rome Italy.

The idea of bilateral paintings stems from a desire to free painting from its usual support. By freeing paint from the supporting surface, a versatile work of pure colour is created. The term ‘bilateral’ derives from the fact that both sides of the paint surface are visible: both sides belong to a single layer of paint and a new side becomes visible, namely, the side that till now has been concealed by the support itself, whether canvas, paper, board or other supports. The two sides differ from each other considerably: since I worked only from one side of the painting, the other side was revealed only once the paint had dried, thus allowing for an element of unpredictability and surprise. This idea corresponds to the way I perceive the context in which we live. All the planets and stars in the universe, although energy, are in essence rocks and accumulations of gases. Our planet is also a rock of energy, the difference being that it ‘hosts’ life which attaches itself to the planet like a mantle and projects itself towards the micro, through humankind right up to its smallest component, the atom (an essential element). A life-mantle thus corresponds perfectly to humankind, which is both part of and at the same time is life-mantle. The bilateral nature of the human extremes of conscious and unconscious corresponds to the terrestrial mantle whose outside layer is turned towards the universe thus corresponding to the conscious, while its other layer is turned towards the planet earth where its roots lie (consider, for example, volcanoes), thus corresponding to the unconscious of the life-mantle. The atom, together with protons, electrons and neutrons, is made up mainly of empty space. Similarly, humankind uses only a small proportion of the human brain, the remainder being the unconscious or empty space[1]. The conscious is like a reader of data from the unconscious, reading by means of the energy of colour frequencies which in the end are but an illusion.The essence of bilateral painting, matching the essence of life which is itself absolute art, is not exclusively the representation of this life-mantle even though at first sight it might seem so. The paintings themselves do not represent tangible images; they are made of  material colour, by me, a human being corresponding to the micro of the life-mantle. The method of creating bilateral paintings corresponds perfectly to the idea of the life-mantle. Acting consciously during the creation of the bilateral paintings, I contain the unconscious within myself, expressing it in the hidden layer of the painting. My conscious and unconscious correspond to the bilateral nature (conscious/unconscious) of the life-mantle, of which I am a projection like all other human beings. I also consider the paint that goes into these bilateral works as the energy frequency of which all life-mantle is composed. In this way, bilateral painting documents rather than represents the process of freeing painting from its supports.  The act of discovery of the hidden side of painting implies revealing and freeing the unconscious from support, in a search for balance and harmony between two human sides which in the end are the same thing (the same layer of paint).

[1] Empty space in physics refers to the absence of matter. In my thinking it corresponds to the immaterial and therefore also to the unconscious, which I see as the real world, while the conscious or material (protons, neutrons and electrons of the atom) are for me an illusory projection of the unconscious, like a monitor which displays the abstract data of a computer.