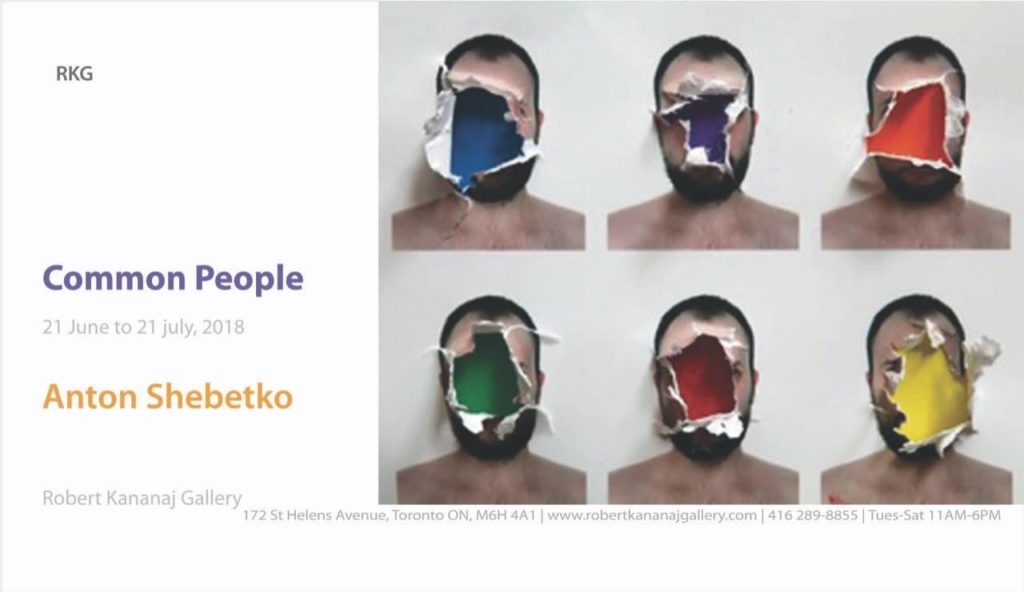 Robert Kananaj Gallery presents the first solo exhibition by Ukrainian artist Anton Shebetko in Canada. "Common People" is a series of distorted portraits and interviews with Ukrainian closeted gays. It is being shown for the first time in full.

Overview: According to statistics, homosexuals make up 5 to 10% of the total population of the planet. However, according to polls, only 5% of Ukrainians know at least one openly LGBTQ person.

Perhaps the situation in Ukraine is not as deplorable as in countries where homosexuality is criminally punishable. But, being in the "grey zone", gays deny the struggle, avoid Pride events, prefer "not to advertise" and sometimes even use openly homophobic rhetoric. The Ukrainian gay community consists mostly of closeted gays. These people are made protagonists of the project "Common People".

The project consists of several dozen impersonal portraits - manually spoiled or initially taken without faces - of Ukrainian gays who hide their homosexuality from others e.g. family, colleagues, friends.

The portrait is often perceived as one of the most honest genres of photography. It should reveal the personality and character of a human. The destruction of the portraits, hiding the faces of the heroes, is a symbolic act. These heroes can not be open to others; we cannot see their faces, learn their personalities.

Sing-a-long Gay Song (video / diptych)
“Blue Moon” is a song from 1998 by Russian pop singers Boris Moiseev and Nikolai Trubach. The song was extremely popular in Russia and Ukraine. Lyrics from it have become memes and remain well-known in both countries even now. For both singers it became a signature song and one of their biggest hits. Moiseev built his career on the image of a gay man, even calling himself a “spoiled child”. Such a situation would be almost impossible nowadays.
A few years ago, when the political climate and views on the existence of gay people began to change, Moiseev announced that he is not gay:  It was just a publicity stunt, and he would soon be married to a woman. Trubach, on the other hand, is straight. In some interviews Trubach mentioned that he was afraid the gay Moiseev would sexually harass him.
The lyrics of the song have a double meaning: The word “blue” in Russian slang also means “gay”. From this perspective, it’s a song about two brothers, one of whom is straight while the other is gay. The song became a kind of gay anthem in some post-Soviet countries.
This video consists of two parts: The first plays a karaoke version of the song with lyrics and music over two filmed attacks by members of right-wing gangs on the Kyiv gay club “Pomada”; the second of these attacks was successful and the club was destroyed. However, it was empty at the time and no one was harmed.
The second part is a recorded live performance by Shebetko himself of the song in one of Kyiv’s karaoke lounges.

Pleshka (video)
This video is a documentation of the final part of one of Shebetko’s previous projects, “Pleshka”.
“Pleshka” is the name given to meeting places or cruising spots for homosexual men in the former Soviet Union. These places existed in almost all the major cities; there gays had the opportunity to meet, socialize and find a sexual partner. Usually pleshkys were located in urban parks and gardens, near the public toilets. The first records of Kiev’s "pleshka" date to the early twentieth century. Nowadays with the development of the Internet and mobile dating applications, pleshkys are seen as rather outdated and are virtually unused.
This video shows the artist planting a pear tree at one of the cruising spots in Hydropark in Kyiv. Fruit trees are not typical of this park.

Anton Shebetko is a Ukrainian artist and photographer. Based in Amsterdam, he works with LGBTQ-related topics. His project "Pleshka" about the old meeting places of the Kyiv gay community was shown at the Festival of Young Ukrainian Artists at the Mystetskyi Arsenal in 2017. His latest project “We Were Here” was made as a result of an art residency organized by KyivPride and Izolyatsia Foundation in Kyiv. His series of staged portraits of LGBTQ soldiers and volunteers who took part in the war in eastern Ukraine, became part of this year’s KyivPride media campaign